One of my clients had two Pugs, Penny and Vince. When the dogs were around a year old, Vince began to be aggressive towards Penny at meal times.

Vince was put on tablets prescribed by the vets; this helped to some degree but did not totally cure his aggressive behaviour. The client had tried a couple of behaviourists which did not seem to work. When the aggressiveness increased, they called us, Sue managed to calm down Vince’s aggression and make him a lot happier which in turn made him a friendly dog. Vince no longer needs any medication from the vets. 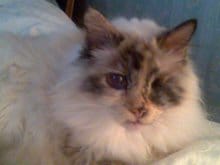 A Cats Protection fosterer contacted me regarding a cat called Patch. He had been in foster care for several months because of his anti-social behaviour which made rehoming him impossible. After some extensive therapy, Patch was rehomed on to a secure and loving family that give him plenty of attention.

Poppy, a difficult to handle Springer 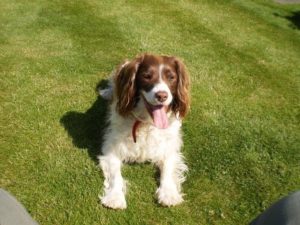 Poppy’s owners were unable to get her on a lead or into the car; even brushing her was a nightmare. Sue helped them a great deal, quietly teaching Poppy to accept handling, grooming and even having her foot bathed when she hurt it in an accident. Poppy is fine now putting on the lead and she loves going out in the car to the park where she plays happily.

This story was also published in the Dogs Today magazine.

Back to Dog Training Suffolk Homepage

Sue Kewley Practice have been in business for many years and have countless satisfied customers. Click here to read testimonials from just a selection.