Sue Kewley is a respected expert in her area and is regularly called on to write articles for national publications like Dogs Monthly and Dogs Today, and has featured on BBC radio.

Above: Dog Training expert Sue Kewley talks to the BBC’s Mark Murphy on BBC Radio Suffolk about some of the strange things dogs eat. Sue gives Mark some tips on how to discourage dogs from picking things up in their mouths. This is a clip from Mark’s show on the 6th January 2016.
Above: On the the 14th December 2016, Sue Kewley, cat behaviour expert, spoke to Mark Murphy on BBC Radio Suffolk about the behavioural problems of Leo the cat, as described by Leo’s owner, Rachael, in this short clip. Leo had been creeping into neighbours houses and stealing various objects. Mark asked Sue if she had any tips for other cat owners in a similar predicament, where their pets were bringing home other people’s things.

The following article appeared in January 2017’s Dogs Monthly and a transcript can be read in the following blog Terrier Terrors. 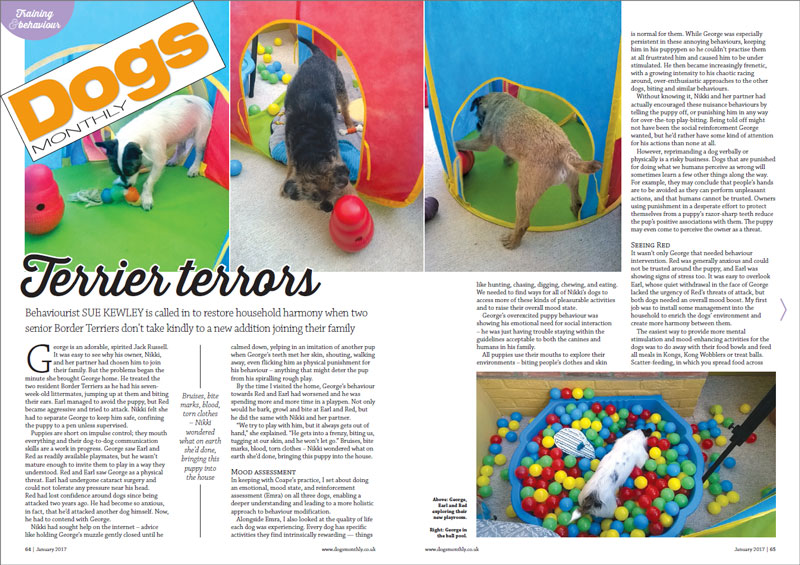 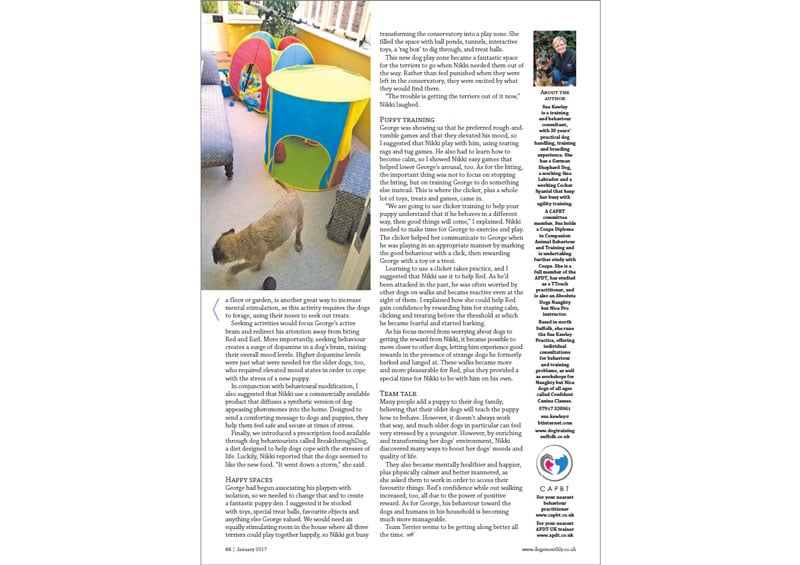 The following article appeared in January 2016’s Dogs Monthly and a transcript can be read in the following blog Caring for the Emotional Well-Being of a Brood Bitch. 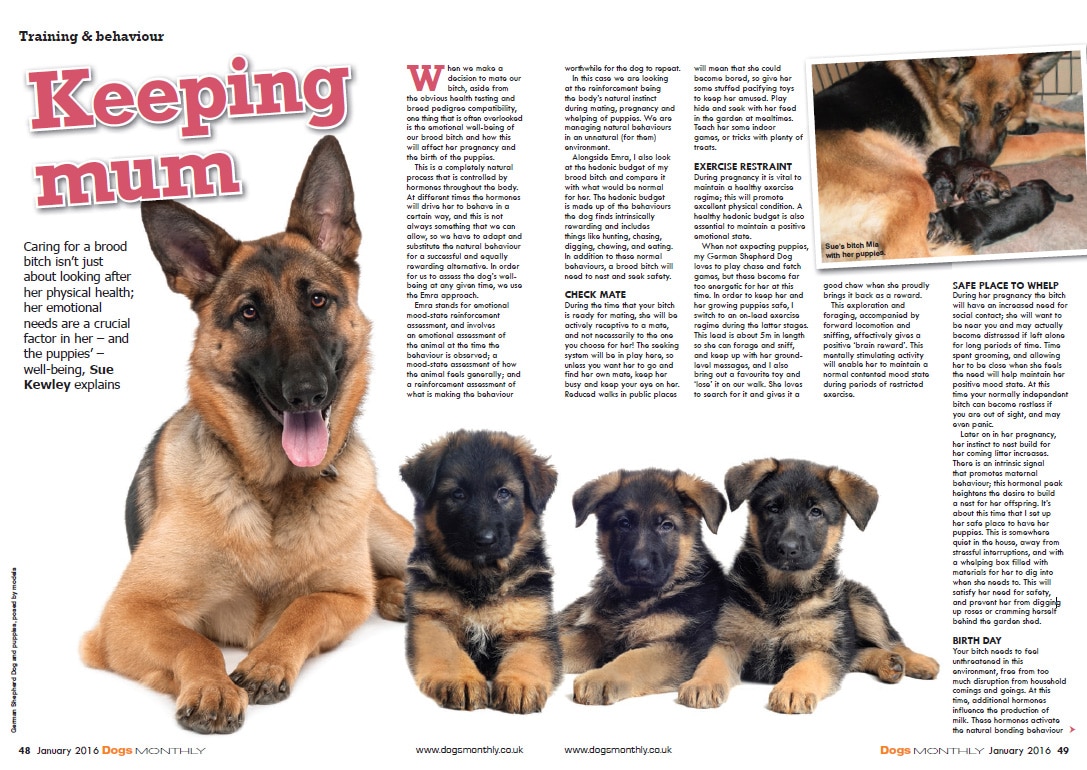 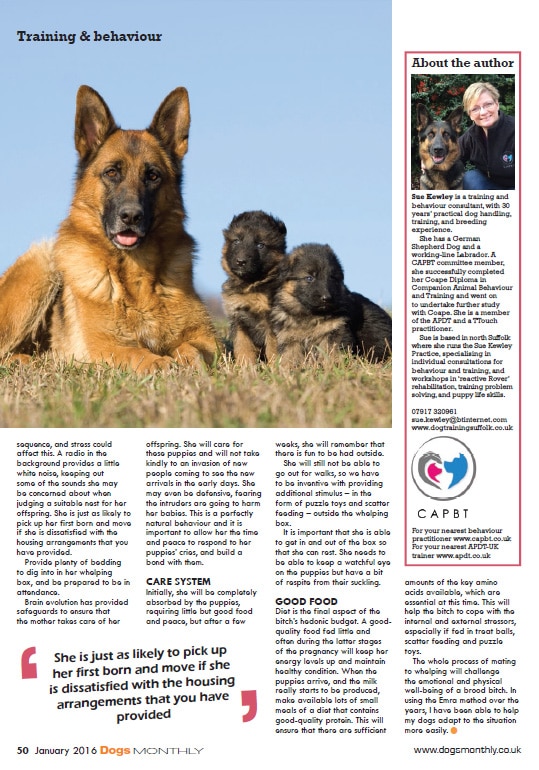 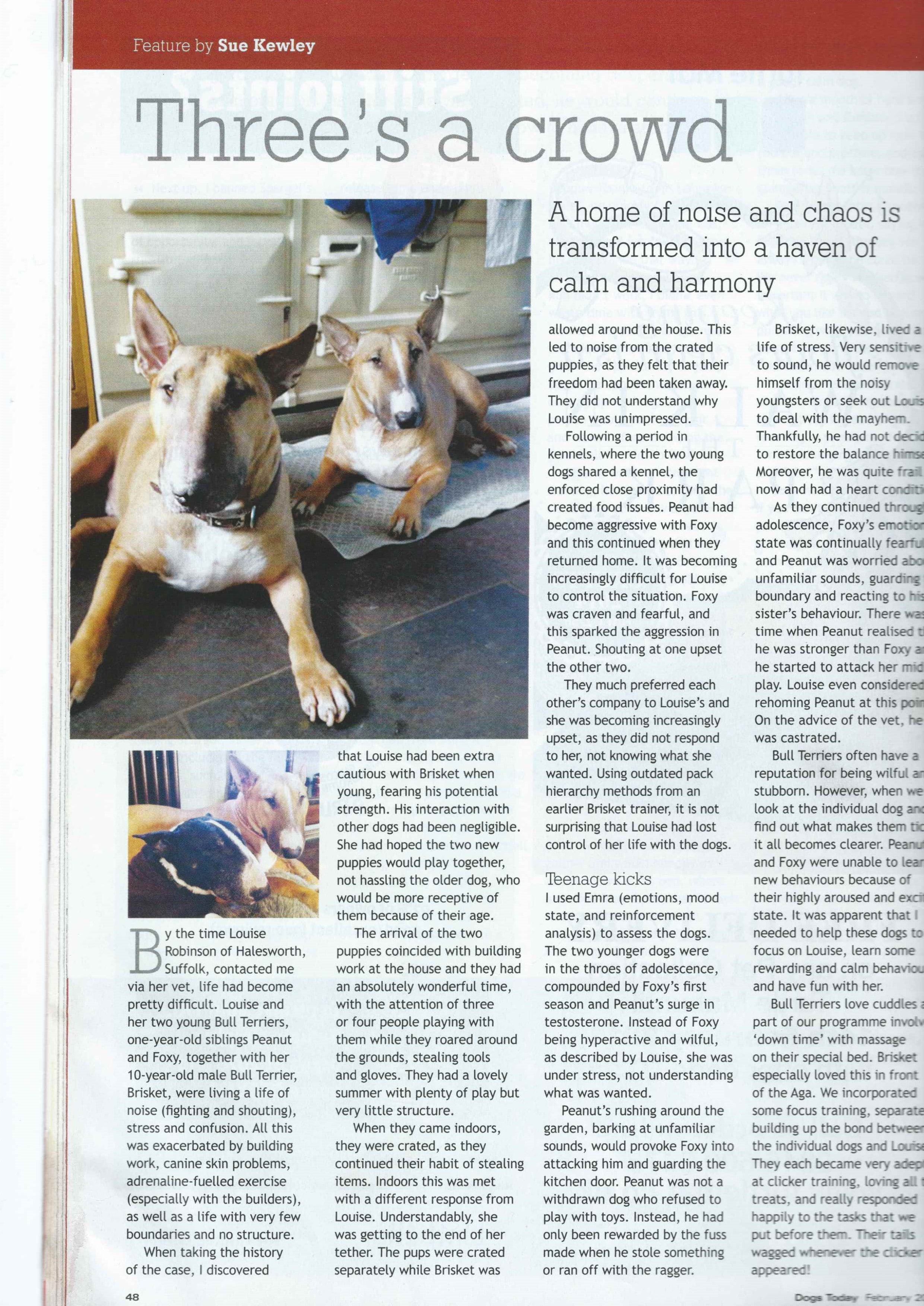 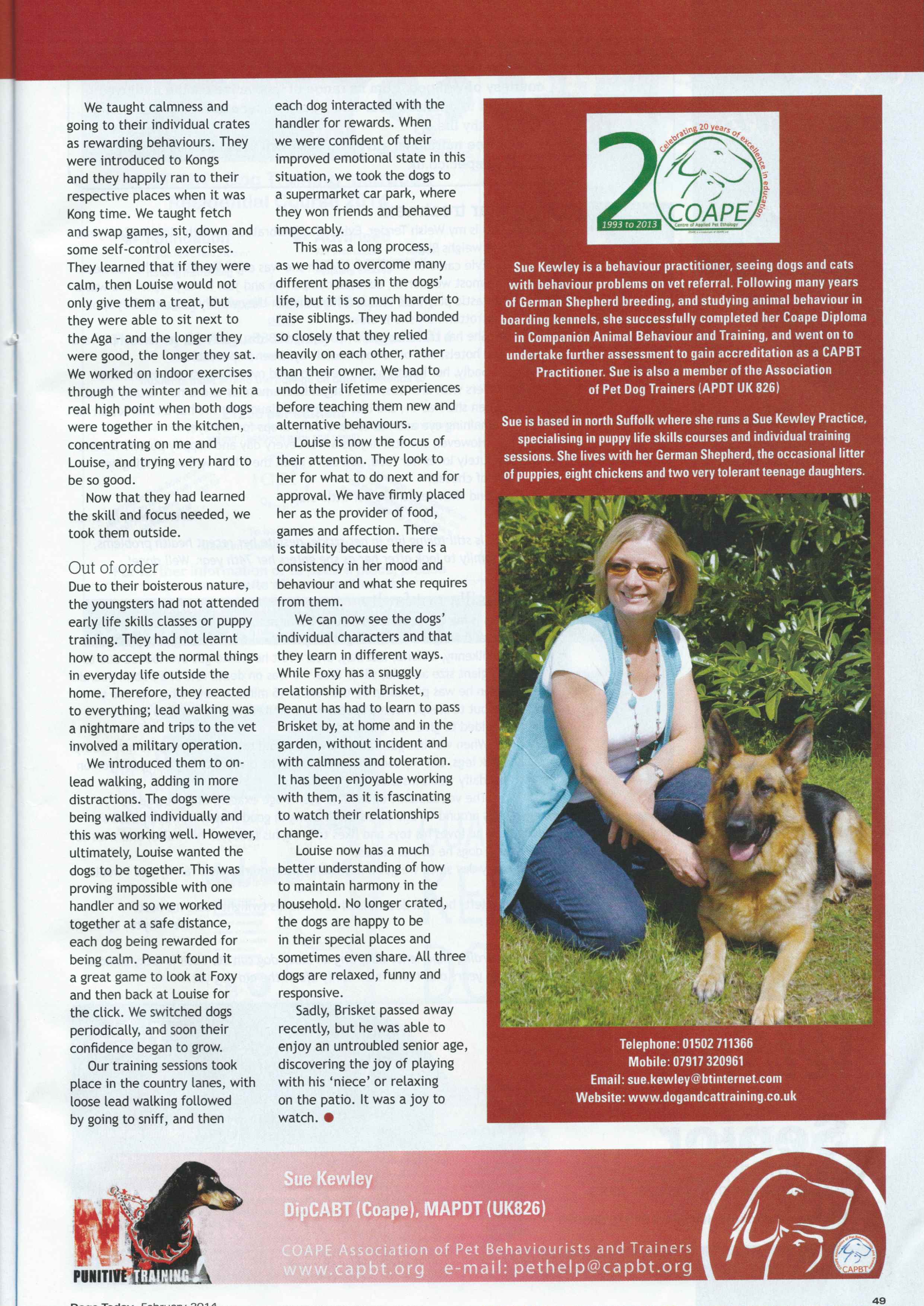 By the time Louise B Robinson of Halesworth, Suffolk, contacted me via her vet, life had become pretty difficult. Louise and her two young Bull Terriers, one-year-old siblings Peanut and Foxy, together with her 10-year-old male Bull Terrier, Brisket, were living a life of noise (fighting and shouting), stress and confusion. All this was exacerbated by building work, canine skin problems, adrenaline-fuelled exercise (especially with the builders), as well as a life with very few boundaries and no structure.

When taking the history of the case, I discovered that Louise had been extra cautious with Brisket when young, fearing his potential strength. His interaction with other dogs had been negligible. She had hoped the two new puppies would play together, not hassling the older dog, who would be more receptive of them because of their age.

The arrival of the two puppies coincided with building work at the house and they had an absolutely wonderful time, with the attention of three or four people playing with them while they roared around the grounds, stealing tools and gloves. They had a lovely summer with plenty of play but very little structure.

When they came indoors, they were crated, as they continued their habit of stealing items. Indoors this was met with a different response from Louise. Understandably, she was getting to the end of her tether. The pups were crated separately while Brisket was allowed around the house. This led to noise from the Crated puppies, as they felt that their freedom had been taken away. They did not understand why Louise was unimpressed.

Following a period in kennels, where the two young dogs shared a kennel, the enforced close proximity had created food issues. Peanut had become aggressive with Foxy and this continued when they returned home. It was becoming increasingly difficult for Louise to control the situation. Foxy was craven and fearful, and this sparked the aggression in Peanut. Shouting at one upset the other two.

They much preferred each other’s company to Louise’s and she was becoming increasingly upset, as they did not respond to her, not knowing what she wanted. Using outdated pack hierarchy methods from an earlier Brisket trainer, it is not surprising that Louise had lost control of her life with the dogs.

I used EMRA (emotions, mood state, and reinforcement analysis) to assess the dogs. The two younger dogs were in the throes of adolescence, compounded by Foxy’s first season and Peanut’s surge in testosterone. Instead of Foxy being hyperactive and wilful, as described by Louise, she was under stress, not understanding what was wanted. Peanut’s rushing around the garden, barking at unfamiliar sounds, would provoke Foxy into attacking him and guarding the kitchen door Peanut was not a withdrawn dog who refused to play with toys. Instead, he had only been rewarded by the fuss made when he stole something or ran off with the ragger.

Brisket, likewise, lived a life of stress. Very sensitive to sound, he would remove himself from the noisy youngsters or seek out Louise to deal with the mayhem. Thankfully, he had not decided to restore the balance himself. Moreover, he was quite frail now and had a heart condition.

As they continued through adolescence, Foxy’s emotional state was continually fearful and Peanut was worried about unfamiliar sounds, guarding boundary and reacting to his sister’s behaviour. There was time when Peanut realised that he was stronger than Foxy and he started to attack her mid play. Louise even considered rehoming Peanut at this point. On the advice of the vet, he was castrated.

Bull Terriers often have a reputation for being wilful and stubborn. However, when we look at the individual dog and find out what makes them tick it all becomes clearer. Peanut and Foxy were unable to learn new behaviours because of their highly aroused and excited. state. It was apparent that I needed to help these dogs to focus on Louise, learn some rewarding and calm behaviours and have fun with her.

Bull Terriers love cuddles and part of our programme involved ‘down time’ with massage on their special bed. Brisket especially loved this in front of the Aga. We incorporated some focus training, separately building up the bond between the individual dogs and Louise. They each became very adept at clicker training, loving all the treats, and really responded happily to the tasks that we put before them. Their tails wagged whenever the clicker appeared.

We taught calmness and going to their individual crates as rewarding behaviours. They were introduced to Kongs and they happily ran to their respective places when it was Kong time. We taught fetch and swap games, sit, down and some self-control exercises. They learned that if they were calm, then Louise would not only give them a treat, but they were able to sit next to the Aga – and the longer they were good, the longer they sat. We worked on indoor exercises through the winter and we hit a real high point when both dogs were together in the kitchen, concentrating on me and Louise, and trying very hard to be so good.

Now that they had learned the skill and focus needed, we took them outside.

Due to their boisterous nature, the youngsters had not attended early life skills classes or puppy training. They had not learnt how to accept the normal things in everyday life outside the home. Therefore, they reacted to everything; lead walking was a nightmare and trips to the vet involved a military operation.

We introduced them to on-lead walking, adding in more distractions. The dogs were being walked individually and this was working well. However, ultimately, Louise wanted the dogs to be together. This was proving impossible with one handler and so we worked together at a safe distance, each dog being rewarded for being calm. Peanut found it a great game to look at Foxy and then back at Louise for the click. We switched dogs periodically, and soon their confidence began to grow.

Our training sessions took place in the country lanes, with loose lead walking followed by going to sniff, and then each dog interacted with the handler for rewards. When we were confident of their improved emotional state in this situation, we took the dogs to a supermarket car park, where they won friends and behaved impeccably.

This was a long process, as we had to overcome many different phases in the dogs’ life, but it is so much harder to raise siblings. They had bonded so closely that they relied heavily on each other, rather than their owner. We had to undo their lifetime experiences before teaching them new and alternative behaviours. Louise is now the focus of their attention. They look to her for what to do next and for approval. We have firmly placed her as the provider of food, games and affection. There is stability because there is a consistency in her mood and behaviour and what she requires from them.

We can now see the dogs’ individual characters and that they learn in different ways. While Foxy has a snuggly relationship with Brisket, Peanut has had to learn to pass Brisket by, at home and in the garden, without incident and with calmness and toleration. It has been enjoyable working with them, as it is fascinating to watch their relationships change.

Louise now has a much better understanding of how to maintain harmony in the household. No longer crated, the dogs are happy to be in their special places and Sometimes even share. All three dogs are relaxed, funny and responsive. Sadly, Brisket passed away recently, but he was able to enjoy an untroubled senior age, discovering the joy of playing with his ‘niece’ or relaxing on the patio. It was a joy to watch.

Sue Kewley is a behaviour practitioner, running dog behaviour courses Suffolk, and seeing dogs and cats with behaviour problems on vet referral. Following many years of German Shepherd breeding, and studying animal behaviour in boarding kennels, she successfully completed her Coape Diploma in Companion Animal Behaviour and Training, and went on to undertake further assessment to gain accreditation as a CAPBT Practitioner. Sue is also a member of the Association of Pet Dog Trainers (APDT UK 826).
Sue is based in north Suffolk where she runs a Sue Kewley Practice, specialising in puppy life skills courses and individual training sessions. She lives with her German Shepherd, the occasional litter of puppies, eight chickens and two very tolerant teenage daughters.

Sue Kewley Practice have been in business for many years and have countless satisfied customers. Click here to read testimonials from just a selection.